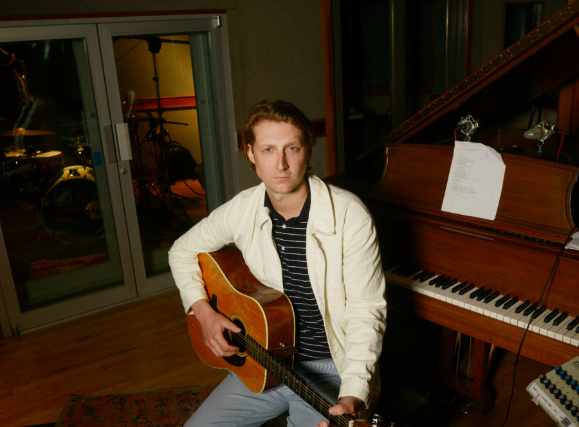 The past year has taken away so much from everyone of us, and yet, we’ve all found moments of inspiration and hope in the midst of our grieving. The dichotomy is not unfamiliar to singer-songwriter Eric Hutchinson and his family, who not too long ago, had their own experience with the highs and lows that life can hand us: Eric’s wife Jill lost her mother to cancer, and just days later, Eric and Jill learned that they would be having a baby girl. “I felt an overwhelming sense of inspiration”, Hutchinson says.“I wanted to capture all the positivity and love inside of me, and make something I could show my daughter later.”
The result is Before & After Life, a complex, introspective, and jazz-tinged record that weighs happiness against sadness and was written and recorded in the days leading up to the birth of Eric’s daughter, Zelda in 2018.
“I wrote these songs in a reflective and transformational time while I was existing in the valley between death and life,” Hutchinson explains. “The first half of the album are all songs about birth, life and parenthood. The second half of the record are questions and musings about death and where any of us goes in the afterlife.”
This new work continues Eric’s recent pattern of genre-hopping. After diving into the Americana/soul of Modern Happiness and the 90’s alt-rock escapades of Class of 98, Before & After Life finds Eric exploring a Pop-based, Jazz-rooted sound, one that calls to mind artists like Van Morrison and Joni Mitchell. He explains: “I’m very inspired by artists who are constantly evolving their sound and aren’t afraid to incorporate all different types of music into their songs, while still maintaining a sense of self.”
To help shape his latest project, Eric recruited an entirely new band, an elite group of some of New York City’s finest jazz musicians. “I felt like I was in Ocean’s 11 putting together a team for a secret mission,” he jokes. The dynamic band consists of trumpeter Wayne Tucker, tenor saxophonist Patrick Bartley, drummer Charles Goold, bassist Barry Stephenson, and pianist Hila Kulik. “These are world-class musicians,” Eric enthuses. “They’ve played with modern jazz greats like Wynton Marsalis and Jon Batiste, so to hear them fill out my tunes was an honor.”
The opening track “The Best Part” sets the tone with a joyous melody, vibrant horns, a dancing piano, and a warm-hearted groove. Eric celebrates the announcement of a new life in his world, questioning: “Is this really happening and are you really real? We’re looking at the plus sign and we’re wondering how to feel.”
“Right Where I’m Supposed to Be” finds the singer recounting the trials and tribulations of his own life, before finding peace as a parent. “I’ve been wrong. But now I’m right where I’m supposed to be”, he declares over the fervor of a jubilant 1950’s-style horn section. “It’s one of those songs that sort of fell out of me in a moment of clarity” Eric
recounts. “I saw myself going from adulthood to parenthood and was excited that everything was about to change.”
Songs like “I Hope She’s Just Like You” and “Why I Love Your Mom” are odes to the important female figures who continue the circle of life. “I watched my wife lose her mom and then become a mother to our baby girl,” Eric reflects. “I was struck by all these important women in my life and was inspired to pay homage to them.”
“Hell Or Something Like It” and “Life After Life” show Eric asking the larger than life questions through a more satirical lens, with him wondering: “Where do I go when I die and my life has been lost? Will I feel foolish for all of my funeral costs?” and “If I’m re-incarnated I must be rolling over in my grave.”
To complete the recording, the emotional centerpiece of Hutchinson’s latest offering is “Born in the Dark” - a somber, rich, and contemplative dive into the beyond that begins the second “death” half of the album. “It was important for me to write that song,” Eric recalls. “I was trying to pinpoint where the circle of life ends and begins again.” The track is a slow meditative burn that eventually evolves into a cascading makeshift-Afrobeat.
Taken as a whole, Before & After Life arrives as Hutchinson’s most introspective yet inspired work, one that will surely resonate and surprise longtime fans of the singer’s pop-soul hits like “Rock & Roll,” “Ok, It’s Alright With Me,” and “Dear Me.”
For Hutchinson, 2021 feels like the right time to release this time capsule from 2018. “These songs and their sentiments are very aligned with the strange and emotional days we’re all living right now, ” he says. “Life and death have never mattered more.”

Eric Hutchinson is an international platinum-selling singer, songwriter and seasoned touring artist. He has performed in all 50 states and has shared the stage with acts such as Jason Mraz, Amos Lee, Ingrid Michaelson, O.A.R., and Michael Franti. His single “Rock & Roll” earned him his first gold record in the United States and the song became a #1 hit in several countries.